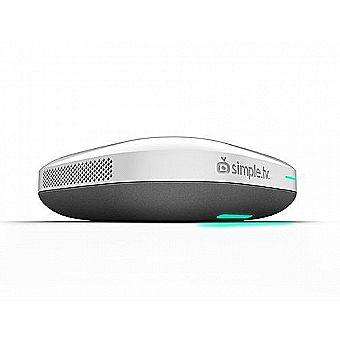 Be the first to leave a product review

Simple. TV is the premier single tuner DVR that captures free-to-air broadcast HDTV, and streams live & recorded TV to all your favorite devices — anywhere, anytime. Get all your broadcast TV favorites on iPad, Android device, PC, Mac or Roku box and never pay for cable again.

Simple. TV is the ultimate DVR for your iPad Watch live and recorded television from anywhere you have an Internet or 4G/LTE connection. Don’t have an iPad? No problem, use an iPhone or iPod touch! You can also watch television on your big screen along with your Roku box if that’s the way you roll. We also love Android and will be rolling out Android support (native apps) before the end of this year.

Simple. TV lets you add your own USB hard drive you watch and record cable TV (unencrypted basic cable a. k. a. ClearQAM). For a better experience, you can cut the cord and ditch cable TV by using your own over-the-air antenna (available at fine electronics stores) to watch and record free broadcasts from all of the major broadcasters.

Compared to other similar OTA DVR solutions in the market, Simple. TV Premier Lifetime is dramatically less expensive to purchase, doesn’t require pricey monthly fees, and doesn’t have any minimum term commitments or any termination fees. It does exactly what we promise – it turns any of your connected screens into your very own entertainment system.  You don’t need a cable subscription. Your Premier Lifetime subscription is transferable to any new Simple. TV devices in the future. So, when the time comes to upgrade your unit, you won’t have to purchase a new subscription.